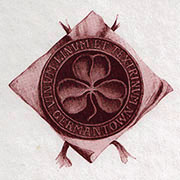 Achievement in the context of the award is broadly defined. The honoree may have published significant research in the field, may have served the Society and the field of German-American Studies in an outstanding fashion, or may otherwise have made an outstanding contribution to the field.

Nominations for the Outstanding Achievement Award should be forwarded to the chair of the Nominations Committee no later than September 1 of a given year for consideration for the following year. All nominations should include a letter which specifies the reasons why the nominator feels the award is justified as well as a short précis of the nominee’s accomplishments.